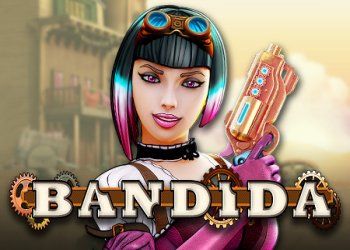 The Bandida slot is a new casino game from Leander. Play Bandida and follow the criminal career from the most wanted female outlaw of the Wild West. This slotmachine has 5 reels and 20 paylines. Try to win the Bank Vault Jackpot. The Bandida Way feature is triggered when 3 bandida symbols land stacked on reel one. All coin, gold bar and red gem symbols transform into bandida symbols, which is the top-paying symbol on the slot. The Jailbreak free spins are triggered when the Bandida feature triggers a full stack of sheriff symbols land on reel five. The bandida is locked behind bars on reel one and 10 free spins awarded. Her sentence is nine years and will decrease by one year after each spin, setting her free on the last spin.