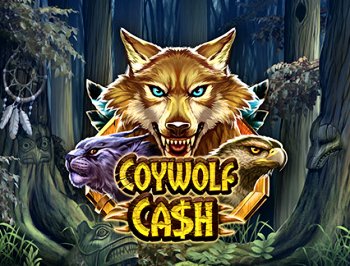 The Coywolf Cash video slot from PlayNgo has 50 paylines and dynamic features. The Coywolf appears in your game in two different forms to make up the game’s Wilds. The first is the standard Coywolf, which substitutes for any in-game symbol (excluding the Scatters) to create a win along the paylines. The game symbols are represented by the woodlands other natural predators, the Black Bear, the Wolverine, the Lynx, the Hawk and the Fox. The remaining symbols take the form of the 10 through card values. Coywolf Wilds can also appear stacked on reel 2 and 4 during the base game, and during your free spins feature Prey Spins. The second Wild is the powerful Alpha Coywolf which will appear in the Wild Reel. So become an apex predator of the slots with Coywolf Cash!