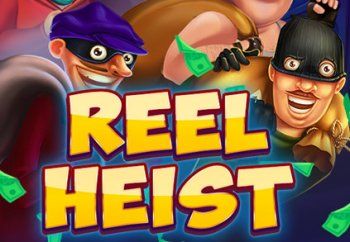 Play the Reel Heist video slot and take the loot. This online Cops and Robbers game has exciting features. Try Reel Heist for free. Robbers appear randomly on the reels. Each robber holds a WANTED poster which shows the stake multiplier value of the REWARD for his capture. The cop appears on the reels at random and also acts as a WILD symbol as he moves around the reels. He may chase and catch the robbers to claim the REWARD advertised. If he manages to hit a robber with his baton as he chases, it will stun the robber and the cop is guaranteed to catch him with more spins.